Official Opening of the New UPM Paper Mill in Ga-Rankuwa

PRETORIA, Sept. 11, 2017 – Friday, September 8th saw the Grand Opening of the new Universal Paper Manufacturers Green Field Tissue Mill at a prestigious event held inside the factory. Mr. William Smith from the Industrial Development Corporation (IDC) and Cllr. Darryl Moss from the Mayoral Committee were among the 150 guests who attended the celebration. The morning was a social gathering for industry professionals who listened to an address by Jonathan Sher (UPM Director) and were lead through the factory in groups by tour guides.

Project Gold Eagle, which started almost 5 years ago, obtained its name and logo from a combination of Dr. Guy Goldstein’s name and the Eagle, which is the national symbol of Poland (PMP is a Polish company). Funding for the project took approximately 2 years to obtain. Fortunately, the IDC had faith in Universal Paper Manufacturers (UPM) as a company and approved the funding.

The celebration held on the 8th of September 2017 was a culmination of a great deal of time and work that was spent on the project by many different partners. As guests entered the event, they signed in to receive their name badge and sign an indemnity form for the factory tours to be held later in the day. 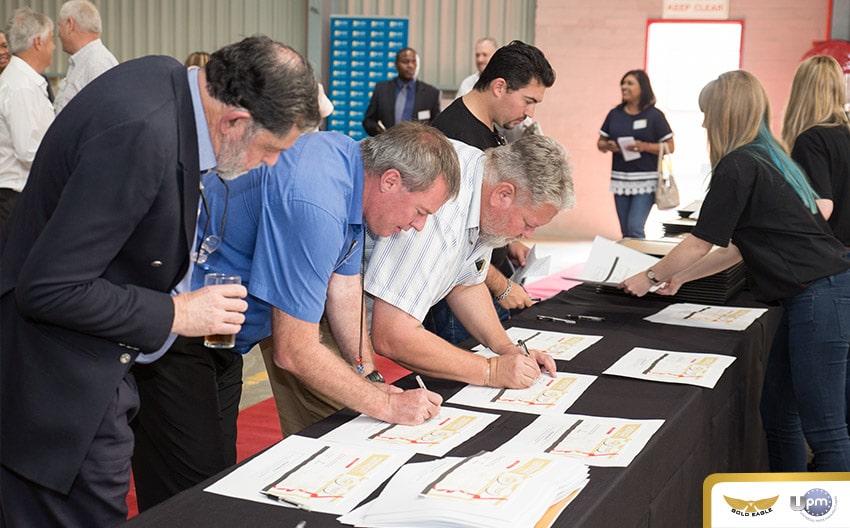 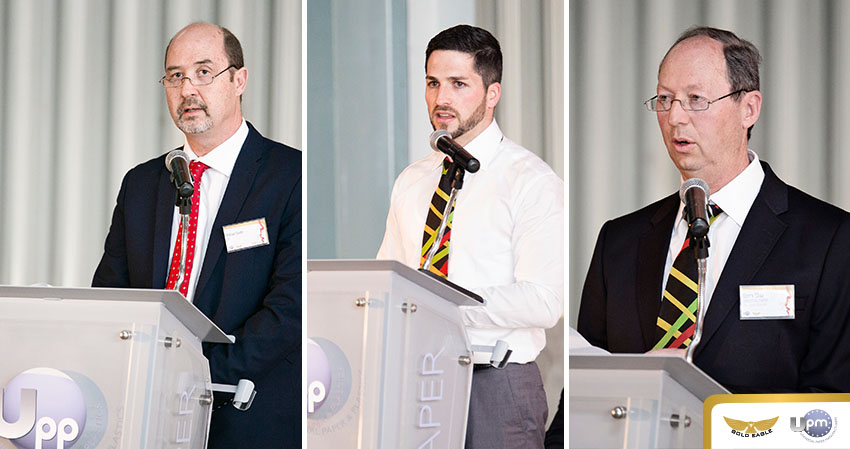 During his presentation, Jonathan Sher said that “the investment has been the biggest in UPM’s entire history” and that “the project has been a huge success.” He added that “the fastest and latest Tissue Paper Machine in the country can be seen at UPM.” Universal Paper covers 58 000 SQM of property, of which 35 000 SQM is undercover. Some of the marvellous engineering facts highlighted included that the factory produces 2000 tonnes of paper per month which is equivalent to 17 million toilet rolls. The length of paper produced annually (788 400 km) is enough to circle the earth 19 times.

Mr. Ziggy Manugiewicz (PMP Board Member) and Mr. Barry Sher (UPM Managing Director) were called forward to do the plaque presentation from PMP. The plaque presentation was followed by a ribbon cutting ceremony performed by Mr. Ziggy Manugiewicz and Mr. Barry Sher to signify the grand opening of the factory and project Gold Eagle. 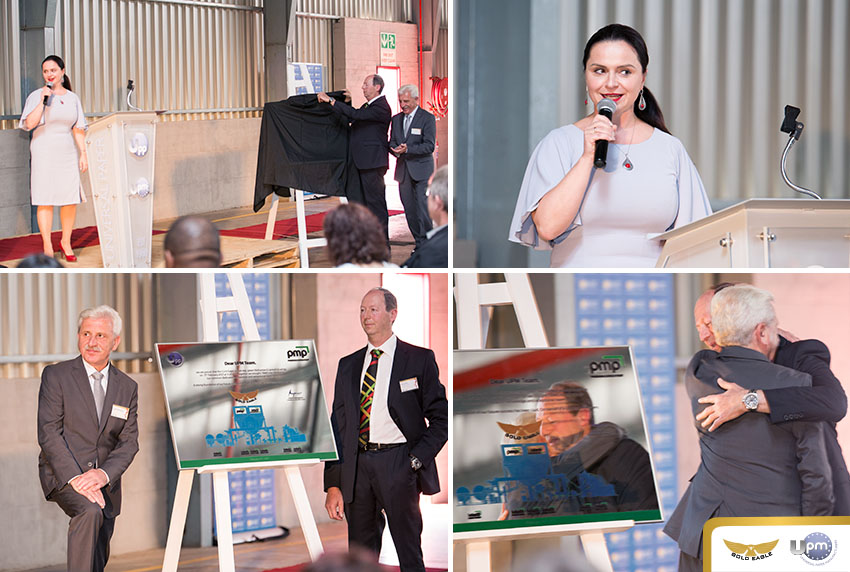 Another highlight of the event was the factory tour, during which guides lead guests around the factory and showed them the impressive new plant. Guests mingled and enjoyed refreshments while waiting for their tour group to be called. Guests signed their names on unique paper certificates made from the paper and ink that Universal Paper manufactures. The signed certificate napkins were framed and guests were able to take the personalised memento with them after the event together with a gift of Dinu Kids Collection Bathroom Tissue. It was an enjoyable event for all involved. Letters of thanks and well wishes were received after the event.

Universal Paper Manufacturers (UPM) – is one of Universal Paper’s business units and is the sister company to Universal Paper & Plastics (UPP). Both companies are still family owned. UPP was established by the Sher family in 1950 and has operated successfully for over 67 years. The company started as a manufacturer of various paper and plastic products and has grown significantly since inception. However, during this time, its direction has changed – with the discontinuation of product lines in the plastics industry, while continuing to supply the tissue paper industry. The company has vertically integrated, by manufacturing raw materials within the inks and paper industry. Today, the focus is on high-quality printed serviettes and napkins, bathroom tissue, household towels and hankies.

Read some of the feedback we received after the event